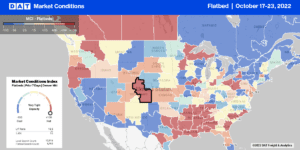 Flatbed carriers are seeing a softening demand driven by seasonal factors and, unlike in recent years, a dramatic slowdown in consumer confidence in the building industry. A reliable flatbed demand indicator for many years has been The Fannie Mae Home Purchase Sentiment Index® (HPSI), which captures home buying/selling consumer sentiment and other indices. The HPSI print for September decreased 1.2 points to 60.8, its seventh consecutive monthly decline and the lowest level since 2011. Surveyed consumers reported expectations that mortgage rates will move higher over the next 12 months, and, for the first time since May 2020, more respondents than not expect home prices to decline.

According to Doug Duncan, Fannie Mae, Senior Vice President and Chief Economist, “75% of consumers still think it’s a bad time to buy a home, with most citing high home prices and unfavorable economic and mortgage rate conditions as primary reasons. As long as supply is limited and affordability pressures continue to constrain potential homebuyers via elevated home prices and mortgage rates, we expect home sales will remain sluggish.”

The bearish outlook report in the HPSI survey was confirmed in the U.S. Census Bureau September report for new residential construction released last week. Single-family housing starts in September were at a rate of 892,000, which is 4.7% below the revised August figure of 936,000 and down 18.5% y/y. Single-family home projects fell to the lowest level since May 2020 last month, decreasing in all regions except the South, where volumes increased 2.5% m/m.

Flatbed capacity tightened in Arizona following an 8% w/w increase in linehaul rates to $1.37/mile. In the Nogales, AZ, cross-border market, flatbed capacity also tightened last week, with rates increasing from $0.09/mile to $1.48/mile, reversing a three-week slide. Most outbound lanes from Nogales reported lower spot rates last week, except for loads 470 miles north to Las Vegas. Linehaul rates on this lane spiked last week and, at $2.31/mile, are $0.74/mile higher than the September average and $0.48/mile higher than the previous year. Nogales is the largest commercial zone for trucks crossing into the U.S. and 4th largest along the southern border, with easy access to Phoenix, Ontario, and Los Angeles freight markets.

In Grand Rapids, flatbed capacity was tight last week – spot rates increased by almost $0.30/mile to $2.84/mile after declining for the prior two weeks. After dropping by $1.48/mile since January, linehaul rates from Grand Rapids to Wilmington, NC, reversed course last week, increasing to $1.88/mile while capacity was flat at $2.51/mile for short-haul loads 331 miles east to Madison, WI. On the West Coast, flatbed capacity was generally tight, with the Reno, NV, market reporting a $0.07/mile w/w gain to an average of $2.21/mile for outbound loads. Further north in the large Portland, OR, market, spot rates increased by $0.04/mile to $2.36/mile following a 38% w/w increase in load posts. 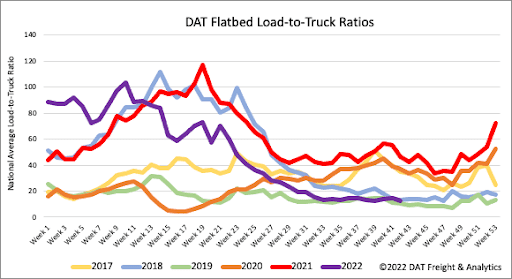 Flatbed load posts decreased by 8% w/w and are now 61% lower than the previous year, like dry van and reefer, which are almost identical to late 2018 and 2019 load post levels when capacity began to loosen following the flatbed rate rally in early 2018. Flatbed capacity remained flat last week and has been that way for the previous month, even though equipment posts were still at the highest level during the last six years for late October. As a result of a decrease in load posts, last week’s load-to-truck (LTR) ratio decreased by 8% w/w from 12.70 to 11.64. 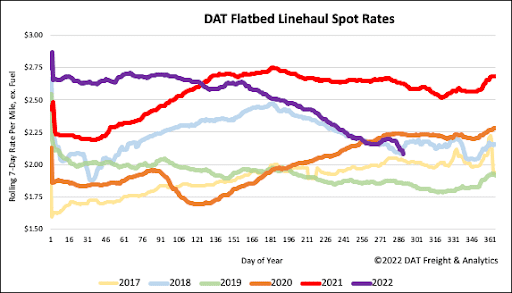