Revenue is up, but so are operating costs. What does it really cost to operate a truck in 2022? 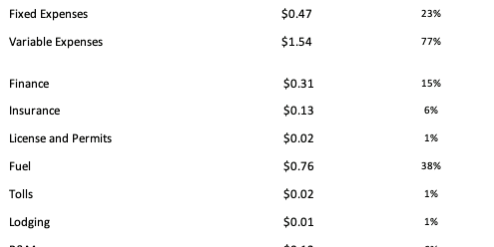 September 27th, 2022–Determining the cost of operating a truck in 2022 depends on who you ask, plus a range of other factors, including the type of business (for-hire, private fleet, power-only, etc.), length of haul, fleet size, truck and trailer type, customer base, accounting methods, debt levels, and commodity hauled, to name just a few. It’s complicated no matter who you ask.

What’s important to remember is there is no right or wrong answer, so let’s start with our best estimate of what it takes to run a single truck operating solely in the spot market. We pick this segment as it’s the most exposed to market volatility and escalating operating costs and has recently been the subject of media attention.

Let’s start at the top – what does it cost an owner-operator to run a truck these days?

With the average cost of ultra-low sulfur diesel (ULSD) at $4.94/gal as of September 19, down $0.85/gal since the $5.81/gal high recorded on June 20th this year, the total operating costs, including wages of this truck, are still around $2.01/mile this week (see Figure 1). That same truck would have cost $1.77/mile to run a year ago, representing an increase in operating costs of 14% or $0.24/mile. The rapid increase in diesel costs is a large part of the rise in operating costs this year. Fuel as a percentage of operating costs has increased by 52% from $0.52/mile a year ago to $0.76/mile today and ranks as the number one expense for an owner-operator. Digging deeper into the average operating costs for the month of September 2022, we see fuel and wages accounting for most of the cost of operating a long-haul truck today.

What are the assumptions used in this operating costs model?

Being a carrier in the spot market, there is no fuel surcharge recapture program, so the spot rates used are average linehaul rates excluding fuel when determining profitability. And, of course, the actual spot rate for loads moved will vary differently depending on the lane(s) the carrier operates on. Take the country’s top 50 spot market lanes, where spot rates averaged $2.27/mile last week. That’s about $0.35/mile higher than the national average for all lanes, and as is the case with averages, there are highs and lows, so DAT takes the average of all loads moved on each lane to arrive at a fair market representation of market rates. Remember, these spot rates are based on loads moved by carriers at accepted rates and not based on rates posted on load boards.

How are carriers doing then?

Mike Hosted, ATBS Vice President of Sales and Marketing, said on a recent webinar that independent owner-operator net income is down around $1,000 annually compared to the 12 months before June 30 this year. That’s partly due to higher operating costs (variable costs up 26.3% y/y), fewer annual miles (down 10.7% y/y), more dock delays and detention time, and more home time.

ATBS also noted that higher diesel prices meant carriers with more fuel-efficient trucks were making money this year. Hosted said, “The best business owners can really do well in this market, and many of them today are running more miles at greater levels of efficiency. The difference between 6 and 7 miles per gallon at today’s prices amounts to about $10,000 in cost a year. He added that most fuel surcharges are based on 6.0 miles per gallon, which means trucks running higher fuel efficiency can actually make money on this transaction.

The bottom line is that revenue is up 22.% y/y as of June this year, but so are costs, which means independent owner-operators are still financially viable and well-positioned heading into the four quarter. What 2023 brings is another story, and owner-operators would be well-advised to ensure they have the first three months’ truck and trailer payments for 2023 in the bank before 2022 ends.

The post Revenue is up, but so are operating costs. What does it really cost to operate a truck in 2022? appeared first on DAT Freight & Analytics – Blog.