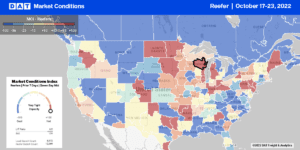 On the Central Californian Coast, where temperatures are mild year-round, lettuce is planted from late December to mid-August for harvest from early April to November. So far, California’s less-than-optimal weather (extreme heat and heavy rain) limits supplies of iceberg and romaine lettuce, and green leaf varieties. The problems are expected to continue through the end of the season in the Salinas Valley until the seasonal shift to growing areas in the desert areas of California and Arizona in mid-November.

According to the USDA, the volume of lettuce shipped in California is around 7% lower than last year and slightly higher than the 2021 levels. Growers are running out of fields to harvest and expect the season to end early in Salinas due to soil disease and plant virus over the past three months. According to Makron Cooperative, “Growers have experienced yield losses of 30% to 80% or more in many iceberg and leaf lettuce crops, forcing them into increasingly younger fields to salvage what product they can before disease or heat/rain-related issues cause further loss.”

Brokers and growers are finding ample capacity to move loads of fruit and vegetables from growing regions, with spot rates averaging $3.87/mile last week in California. This is much lower than the average reefer rate for all temperature-controlled outbound loads (including produce), which averaged $2.28/mile or around 24% lower than the previous year. Some good news, though: strawberry volumes are up 5% year-to-date through week 41 in California, the number two crop ranked by state volume.

Outbound California reefer linehaul rates decreased by 2% last week to a state average of $2.28/mile, although capacity did tighten slightly in Stockton and San Diego markets. In Stockton, linehaul rates for all outbound loads increased by $0.03/mile to $2.20/mile last week, reversing a three-week downward trend. In contrast, capacity loosened on the high-volume lane south to Ontario, where linehaul rates averaged $2.22/mile last week, almost $0.50/mile lower than the September average and $1.45/mile lower than the previous year. Stockton to Los Angeles reefer rates were $0.30/mile higher at $2.51/mile and also lower by almost the same amount as the previous year’s.

In Texas, reefer capacity tightened last week, increasing by 2% w/w to an average of $2.14/mile. Even though it’s one of the smallest markets in the Southwest, capacity tightened the most in San Antonio, where rates increased by $0.09/mile to $1.94/mile. In the largest market in the state, Dallas outbound spot rates increased by only $0.01/mile to $1.95/mile, while in the border market in Laredo, capacity loosened for the third week following last week’s $0.02/mile decrease to $2.09/mile. In Lakeland, FL, where Hurricane Ian made landfall, capacity tightened slightly as spot rates increased by $0.01/mile last week to an average of $1.17/mile. On the high-volume inbound lane from Atlanta to Lakeland, spot rates dropped under $3.00/mile for the first time since May. At $2.96/mile, spot rates on this lane are $1.40/mile lower than the previous year’s. 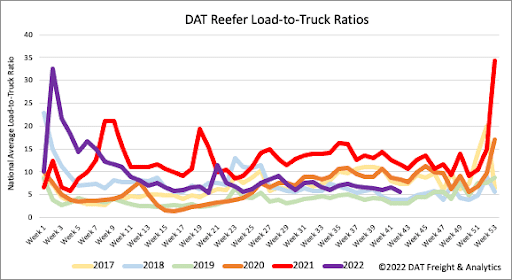 Reefer load posts were very close to 2018 and 2019 levels following last week’s 26% w/w decrease. Reefer capacity continues to loosen following the previous week’s 6% increase in equipment posts, now up 9% in the last month and 6% lower than the record high set in March 2020 as freight demand crashed at the start of the pandemic. Last week’s reefer load-to-truck (LTR) plunged, decreasing by 30% w/w from 5.66 to 3.97, almost identical to 2018 and 2019 LTR levels. 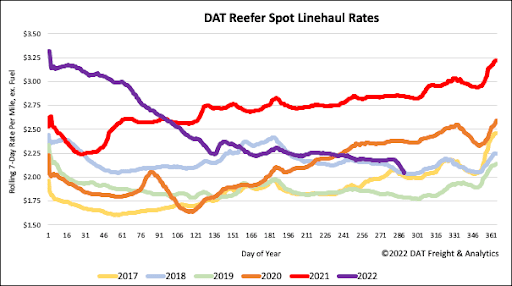 For the first time this year, the USDA did not report a shortage of trucks in any of the 16 produce-growing regions last week for loads of fruit and vegetables. In contrast, last year, there was a shortage of reefer trucks in 17 of the 20 produce-growing regions. According to USDA tracking metrics, truck availability is closer to 2019 and early 2020 levels as reefer capacity continue to loosen through late October. Last week’s national average reefer spot rates decreased by $0.04/mile to a national average of $2.07/mile. Compared to the previous year, reefer rates were $0.82/mile lower and are now $0.02/mile lower than in 2018.