Dry Van Report: There’s only one parking space for every 11 truckers nationwide 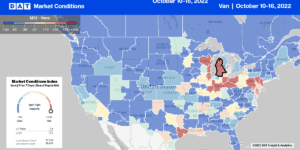 In a recent study, the U.S. Department of Transport (USDoT) found that the truck parking shortage exists in every state and region and is most acute along major freight corridors. There are about 3.5 million truck drivers in the United States and approximately 313,000 truck parking spaces nationally, according to the USDoT; for every 11 drivers, there is one truck parking space.

A few of these awards will directly benefit the trucking industry. In Central Florida, $15 million will be allocated to construct a new truck parking facility with approximately 120 spaces, electric charging stations, and pedestrian infrastructure to access nearby commercial amenities. The facility will be connected to the Florida Department of Transportation’s Truck Parking Availability System to assist commercial vehicle drivers in identifying available parking locations and will include at least six electrical hookups for standby power for refrigerated trucks and power for in-cab comforts.

In Tennessee, $22.6 million will be used to upgrade the welcome center ramps, add approximately 125 truck parking spaces, and upgrade the adjacent bridge structures on I-40 over the Caney Fork River. In New York, $110 million will be used to redevelop the Hunts Point Terminal Produce Market intermodal facility with expanded refrigerated warehouse space and expanding truck queuing and parking areas within the facility.

This week we’re looking at freight volumes and spot rates in California, a top 5 truckload freight market, home to two of the largest ports in the country and the 5th largest economy in the world. At a state level, California comprises short, medium, and long-haul freight lanes with the 2nd longest intrastate length of haul in the country at almost 700 miles from San Diego to Redding. California is also home to the Ontario freight market, where more than 600 warehouses are clumped into 50 square miles. It will also be home to Amazon’s 5-story, 4.1 million-square-foot warehouse – the largest Amazon warehouse in the world once completed. Four hundred miles to the north is another large freight warehouse market in Stockton, the state’s 4th largest port city in California.

Major longer haul freight lanes in California include Los Angeles to Stockton and return, although there is considerable volume imbalance and resulting rate variability on this lane. Los Angeles ships 42% more spot market loads out than in, whereas Stockton is almost the opposite, with 56% more loads in than out. The volume of loads moved, and linehaul rate per mile from Los Angeles to Stockton is down 16% and 29% y/y, respectively, and almost the same on the return journey at 15% and 31% y/y, respectively. As large port warehouse markets, both had seen surging volumes of Asian imports in recent years flood every square foot of warehouse space in late 2018 when shippers pulled forward imports to avoid higher tariffs. The same occurred again in mid-2020 as consumers began purchasing imported retail goods in record numbers.

Outbound dry van linehaul rates in California at $2.25/mile are 10% lower than the national average this week and have decreased steadily since July. Outbound spot rates were down 4% to $2.18/mile. At a lane level, linehaul rates from Los Angeles to Stockton are averaging $2.69/mile this week, down $1.89/mile from last year’s peak of $4.58/mile in December. Being a predominantly inbound freight market, Stockton hasn’t experienced as much volatility on the southbound lane to Los Angeles. At $1.69/mile this week, linehaul rates are $0.35/mile lower y/y; capacity has tightened in recent weeks, with rates up as much as $0.20/mile above the September average.

After exceeding one million load posts for the prior four weeks, volumes dropped below that level decreasing by 9% last week, and are now 35% below the previous year.  Equipment posts increased by 6% last week as spot market capacity continues to loosen and now exceed 2019 levels by 6%.  As a result of fewer load posts and more equipment posts last week, the dry van load-to-truck ratio (LTR) decreased by 14% from 3.51 to 3.03. 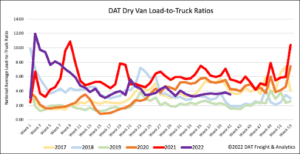 Following the third biggest weekly increase in diesel prices in the Department of Energy EIA retail average price history, dry van spot rates dropped by just over $0.07.mile last week to $1.81/mile. We saw something similar in 2018 when Hurricane Michael made landfall as a Category 5 hurricane along the Florida panhandle in early October – diesel jumped $0.072/gal, pushing up dry van rates by $0.10/mile the same week. Compared to the top 50 dry van lanes, which averaged $2.15/mile the previous week, the national average was $0.34/mile lower. 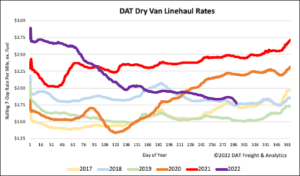