Centipedes on wheels: How Michigan trucks do less road damage than you’d think 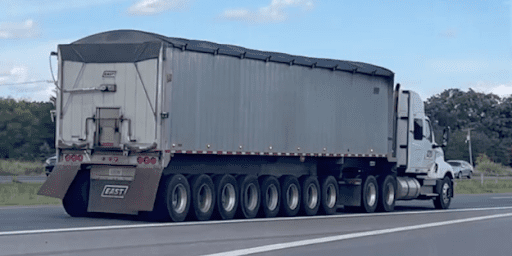 Traveling to the recent Truckload Carriers Association Refrigerated conference in Traverse City, MI, it was hard to escape just how different trucks are in the state. Michigan truckers take it for granted, but to everyone else worldwide, the 11-axle truck/trailer combinations look like centipedes on wheels.

Michigan truckers DAT interviewed said they have limited backhaul opportunities because of freight patterns in the state – trips are frequently one-way cargo movements with an empty return. They cited loads of logs from the forest to lumber mills, gasoline to retail service stations, salt, asphalt, bulk cement, and construction materials. Because of the lack of backhaul opportunities, state regulators and industry stakeholders have a vested interest in moving freight as efficiently as possible, hence the creative trailer designs in use today.

Michigan truckers are more competitive than in other states

According to the Michigan Department of Transport (MDoT), “industries and businesses are more competitive due to our truck weight laws. Freight rates are lower in Michigan for commodities that can use our heavier vehicles because fewer vehicles, drivers, and trips are required. Rates for these commodities have been estimated to be up to 50% lower than those found in adjacent states. In addition, less fuel is burned to transport the same weight of cargo, and there is less traffic congestion and less crash risk from fewer vehicles.”

If Michigan’s weight limits are double other states, how is road damage not worse?

Research conducted by the American Association of State Highway and Transportation Officials, the Michigan Department of Transportation (MDOT), and other organizations have shown that pavement damage is directly related to axle loadings, not gross vehicle weight. DAT also interviewed engineers who believe that Michigan’s heavy trucks impose less damage than the lighter trucks in other states because axle weight determines the damage, not total gross weight. Michigan’s 164,000-pound trucks spread their weight over 11 axles, compared to just five axles on conventional 80,000-pound trucks. In Michigan, the 11-axle trucks are allowed a maximum weight per axle of 13,000 pounds, compared to 18,000 pounds per axle on 80,000-pound trucks.

Interviews with drivers presented a slightly different perspective, with one driver suggesting that it’s not multi-axle trailers that damage roads; it’s the seasonal freezing of roads in winter and thawing in spring. Most drivers cited that “interstate and major state highways are in great shape, but secondary roads are a mess as soon as you get off the main roads.” Another driver who chose to remain anonymous said, “I think it’s more to do with freeze/thaw cycles and lack of vehicle maintenance. But it’s easier to blame trucks for basically everything.” A common theme among drivers apportioned blame on their peers for “accidentally” forgetting to put the four trailer lift axles down on the pavement after cornering, resulting in higher weights per axle on the remaining four axles on the ground.

Why are Michigan truck/trailer combinations so different?

According to Charlie Culton at the Michigan Center for Truck Safety, “The Michigan trains were put on roads in the early 1950s to allow steel haulers to transport more steel at a time to the auto industry, and soon aggregate and other industries follow the design. These combinations with up to 11 axles are allowed on all state and federal highways in the state. However, many local and county roads do restrict both axle and total gross weights on all or some of their roads and bridges. When the Federal Highway Administration established the 80,000 lbs bridge law on the interstate highway system, Michigan’s multi-axle combinations (trains) were grandfathered in federal law.”