International Roadcheck focused on wheels, but that’s not where the story ends 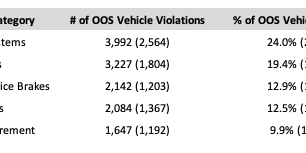 What does being placed out-of-service (OOS) mean?

During a roadside inspection, a commercial motor vehicle is placed out of service when an inspector finds critical safety out-of-service violations. Being put out of service means the driver or vehicle is prohibited from operation for a specified period of time or until the violation is corrected. With operating costs as high as they’ve ever been, being placed in OOS is a real expense to the carrier beyond the cost of repairs, as much as $1,500 per day.

CVSA inspectors in Canada and the U.S. conducted 36,555 Level I inspections (a 37-step process that checks the driver’s operating credentials and requirements and the vehicle’s mechanical fitness and regulatory compliance) last May. As a result, they placed 8,718 vehicles out of service, a 23.1% vehicle out-of-service rate for North America. However, that also means that 77.2% of the vehicles and 93.6% of the drivers inspected did not have out-of-service violations.

In Canada, the total number of inspections was much less. Still, as a percentage of total OOS vehicle violations, brake systems accounted for 38%, followed by cargo securement at almost 19% and defective brakes at 10%. In addition to vehicles being inspected, drivers were also subjected to various inspections, with false logs accounting for almost 45% of OOS driver violations in the U.S., followed by incorrect license class at 24.7% and suspended license at 6%. In Canada, where electronic logging devices have been mandated but won’t be enforced until next year, hours of service violations accounted for just over 76% of driver OOS violations.

The post International Roadcheck focused on wheels, but that’s not where the story ends appeared first on DAT Freight & Analytics – Blog.