Dry Van Report: Supply chains are still in disarray for the time being 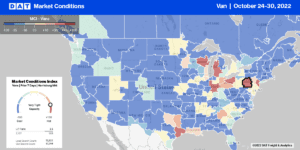 Supply chain disruption has been a hot topic over the past 2.5 years, and although there are signs it could be improving, measuring the level of disruption and improvement remains elusive. Ari Ashe, Senior Editor at The Journal of Commerce, recently wrote about “box turns” in his weekly Please Haul My Freight newsletter, where he offers an excellent analysis of supply chain fluidity. Ari defines box turns as the number of revenue-paying loads an average intermodal container handles in a month. Higher box turn ratios mean the supply chain is fluid, and drivers and containers move with minimal disruptions. A slower box turn means there is a disruption in the supply chain.

Ari says, “If box turns are down 5% y/y, an intermodal provider must use more containers and drivers to cover the same volume as the prior period. I calculate my own estimate of box turns across all US intermodal providers. Unfortunately, they are going in the wrong direction.” In their most recent Q3 earnings report, J.B Hunt reported box turn ratios fell 6.4% y/y and “during the quarter continued to experience growth in demand for intermodal services. Still, volume was negatively impacted by rail velocity challenges, customer detention of equipment, and overall supply chain uncertainties facing our customers.”

Aggregated box turn data across several intermodal carriers suggest box turns are down 7.17% y/y and down 10% since the start of the pandemic in early 2020. But that’s a continuation of a much longer-term trend, though. Except for 2019, box turn ratios have fallen every year since 2013, down 23% over that timeframe.

Loadlink Technologies’ Canadian spot market fell slightly in September, dropping 7% from August and 20% y/y. The slight dip in freight activity is still in line with regular seasonal activity. September’s truck-to-load ratio was 3.65, just 5% higher than the ratio of 3.48 in August 2022 and 38% higher than in September 2021. Outbound cross-border loads from Canada entering the United States increased 7% m/m but fell 27% y/y, while equipment postings fell 9% m/m but were up 18% y/y. In September, loads from the U.S. into Canada were down 22% m/m and 12% y/y. Loadlink measures trends in the truckload freight spot market comprising approximately Canadian carriers and freight brokers.

Lower spot market volumes into Canada were also reflected in decreasing dry van rates on “auto alley” from Laredo to Toronto – the high-volume auto parts freight lane between Mexico and Canada. Following the market disruption caused by the Canadian border protests in February, spot rates on this lane spiked at $3.00/mile in April but have now returned to more normal levels 57% lower at $1.27/mile this week. That’s also around $0.10/mile lower than the previous year.

In the Pacific Northwest, load post volumes increased 11% last week in the combined Seattle and Portland market, pushing up outbound spot rates by a penny per mile to an average of $1.28/mile. In the Mid-Atlantic retail-heavy West Virginia markets, capacity continues to tighten for the fourth week following last week’s $0.05/mile increase to $2.13/mile. 700-mile loads from Huntington, WV, to Hartford, CT, were paying $2.42/mile last week, which is up $0.06/mile over the September average reversing a four-month slide in spot rates. Capacity was also tight in the Northeast last week following last week’s $0.09/mile increase to an outbound average of $2.18/mile.

Shippers tend to clear their docks of as much freight as possible at month’s end following last week’s 3% w/w increase in volumes. Load posts are about half what they were this time last year and 1% lower than 2017 levels, which was considered a recovery year following the 2016 freight recession. Carriers posting their equipment in search of loads are 20% higher y/y following last week’s 3% increase. Slightly more load and equipment posts pushed the dry van load-to-truck ratio (LTR) by 6% w/w from 2.47 to 2.62 last week, slightly above 2018 and 2019 LTR levels.

The post Dry Van Report: Supply chains are still in disarray for the time being appeared first on DAT Freight & Analytics – Blog.