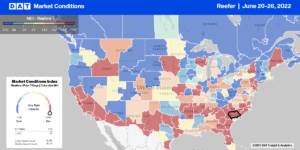 Produce peak season is underway. However, this season is not off to a strong start due to factors ranging from increased input costs to climate challenges. California is in its third consecutive year of drought and experienced a late frost this season. Mexico is also experiencing drought conditions, and the Southeast and the Pacific NW regions had late-season frosts when fruit was budding, which affected crops. Overall produce volumes in the first 25 weeks of this year are down 12.6% y/y and are down 1.2% from 2017 which is the closest comparable year.

According to USDA data, the highest volume refrigerated crop is potatoes, and YTD volumes are down 4% y/y.  Idaho is the largest producer of potatoes and volume is down 15% y/y. According to Idaho Ag, the cost of growing potatoes has increased 36% over the last two years and is expected to increase another 15-20% this year.

Apples are the No. 2 crop, and YTD volumes are down 5% y/y. Washington is the largest growing district and is down 4% y/y.  According to the Washington Apple Commission, apple industry leaders predict a smaller-than-average crop this year due partly to an unusually cold and stormy spring.

Another struggling high-volume crop is tomatoes, and YTD volumes are down 4% y/y. Most fresh tomatoes come from Mexico, and approximately 56% of Mexico is experiencing moderate to extreme drought conditions this season.

One bright side to this year’s season is strawberries, YTD volumes are up 13%, and all growing regions have increased. California is up 14%, Mexico is up 8%, and the Southeast region is up 15% y/y.

With more than 85.5 million people within a day’s drive of Atlanta, it’s no surprise to see Atlanta as the number one reefer market ahead of July 4 celebrations this weekend. After being flat for most of June, load posts jumped 14% w/w while capacity loosened following last week’s $0.03/mile decrease to an average outbound rate of $2.47/mile. On the number lane south to Orlando, capacity tightened with linehaul rates increasing to $3.09/mile or $0.60/mile lower than the previous year. On the southern border in Texas, capacity tightened following last week’s $0.07/mile increase to an average of $2.40/mile. We’re past peak-import season for produce from Mexico, and now we’re seeing spot rates on longer-haul lanes start to drop. Loads from Laredo, TX, to Hunts Point, NY, have dropped $0.20/mile in the last month and at $2.32/mile are $0.84/mile lower than the previous year.

In the Pacific Northwest, load post volumes in Pendleton, OR, have started to heat up, jumping by 68% w/w reversing the month’s long rate slide. Linehaul rates were up just a penny per mile to an average outbound rate of $1.71/mile last week, but on high-volume short-haul lanes to Seattle and Portland,OR, rates are down by $200/load to both destinations compared to the previous year. At $1.13/mile, reefer loads to Los Angeles are $0.56/mile lower y/y.

The current volume of long-haul produce is around 16% lower than this time in 2019, which was the last typical produce season outside of the prior two pandemic-driven seasons. That’s the equivalent of almost 28,000 fewer weekly truckloads of fruit and vegetables moving the previous week compared to the same week two years ago. Load post volumes increased last week by 18%, which is on track seasonally in the leadup to the Independence Day long weekend. As a result of higher load post volumes and a 3% w/w decrease in equipment posts, the reefer load-to-truck (LTR) ratio increased 22% w/w to 7.65.

Last week’s reefer linehaul rate increased by less than a penny per mile compared to the previous week, the second successive w/w gain in the last month. In non-pandemic years, reefer linehaul rates typically increase by $0.12/mile in the first three weeks of June; this year, they’ve dropped by the same amount month-to-date. At $2.26/mile, reefer linehaul rates have dropped 28% or $0.91/mile YTD and are now down $0.09/mile m/m. Reefer spot rates are currently $0.51/mile lower than the previous year and $0.14/mile lower than where reefer spot rates were in 2018, but $0.23/mile higher than the pre-pandemic average for this time of the year.