Flatbed Report: Fewer loads of steel this year are a concern for carriers 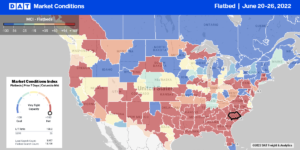 Steel output in the U.S. in the week ending June 11 fell by 3% compared with the same time frame in 2021, according to the American Iron and Steel Institute (AISI). As a result, domestic raw steel production was 1,784,000 net tons, while the capability utilization rate was 81.7% compared to 1,834,000 net tons a year earlier.

The Decatur, AL, market was the top flatbed market last week, following a 23% w/w increase in load posts. Flatbed capacity loosened slightly, with linehaul rates dropping $0.03/mile to an outbound average of $3.80/mile. In contrast, on the 800-mile haul to Kansas City, MO, linehaul rates increased slightly last week to $2.90/mile or around $0.20/mile lower y/y. Next door in Memphis, capacity loosened rapidly following a $0.09/mile drop in linehaul rates to $3.43/mile. Even though the volume of loads moved between Memphis and Dallas increased by 4% last week, linehaul rates decreased to $3.50/mile, $0.30/mile lower than the May monthly average and $0.22/mile lower than the previous year.

Houston came in at number four this week in terms of load posts, which have been flat for the last three weeks, along with outbound linehaul rates holding steady at $2.94/mile. In Savannah, load post volumes increased for the fourth week following last week’s 14% w/w increase. Flatbed capacity has been relatively flat over the previous two weeks, with spot rates averaging around $3.32/mile. On the high-volume lane 250 miles west to Atlanta, at $1,007/load, flatbed linehaul rates are about $190 /load less than the same time last year and just over $100/lower than last month.

Flatbed load post volumes have dropped almost 40% in the last month and are now 26% lower than the previous year. Like dry van and reefer segments, flatbed equipment posts are at their highest level in six years and 15% higher than the last year. As a result, the flatbed load-to-truck (LTR) ratio decreased by 8% w/w to 33.68, 61% higher than in 2018 and almost the same as 2017.

Flatbed linehaul rates were also flat last week at $2.58/mile, which is slightly below the 13-month average. Flatbed spot rates have only decreased by 3% YTD or $0.09/mile and are now $0.16/mile lower than last year but still 5% or $0.11/mile higher than in 2018. Compared to prior non-pandemic years, flatbed linehaul rates are $0.53/mile higher.

The post Flatbed Report: Fewer loads of steel this year are a concern for carriers appeared first on DAT.

Reefer Report: The start of Florida’s berry harvest is delayed to Thanksgiving
November 15, 2022