Flatbed Report: A cold winter ahead for flatbed carriers 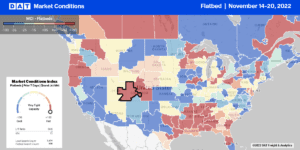 As lumber prices retreat and housing construction demand softens, flatbed carriers with substantial exposure to single-family housing face the prospect of a slow start to 2023. Higher mortgage rates, and construction costs for concrete and other building materials, continue to drag on single-family housing production, which decreased by 6.15% m/m and 20.4% y/y, according to the U.S. Census Bureau.

According to Jerry Konter, chairman of the National Association of Home Builders (NAHB), “Mirroring ongoing falloffs in builder sentiment, builders are slowing construction as demand retreats due to high mortgage rates, stubbornly elevated construction costs and declines for housing affordability.” This will be the first year since 2011 to post a calendar year decline for single-family starts,” said NAHB Chief Economist Robert Dietz. “We forecast additional declines for single-family construction in 2023, which means economic slowing will expand from the residential construction market into the rest of the economy.”

The NAHB /Wells Fargo Housing Market Index (HMI), an indicator of builder confidence in the market for newly-built single-family homes, posted its 11th straight monthly decline in November. According to the NAHB, “ This is the lowest confidence reading since June 2012, except for the onset of the pandemic in the spring of 2020.

Flatbed carriers also get in on the Christmas Tree action this time of the year with capacity tightening in large tree markets, including Oregon, North Carolina, Idaho, and Maine. In those four states, combined spot rates increased by $0.10/mile last week to an average of $2.38/mile, which is $0.48/mile lower than the previous year and almost identical to this time in 2018. In the Southeast in Jacksonville, flatbed capacity also tightened following a $0.48/mile surge in spot rates to an average of $2.38/mile last week. Load posts were up 15% w/w, with most of the gains reported on the short-haul 200-mile lane to Lakeland, where rates increased by $31/load to $617/load or about $10/load higher than the previous year.

In Nashville, flatbed volumes increased by 25% w/w, pushing up outbound spot rates by $0.17/mile to $2.84/mile. Loads to Greenville, SC, were flat at $2.93/mile, while loads north to Boston at $2.12/mile was up $0.18/mile above the October average. In Houston, consistently the largest flatbed spot market, loads moved north to Ft. Worth were flat last week as spot rates hit a new 12-month low at $2.56/mile, $0.55/mile lower than the previous year. Export loads west from Houston to El Paso increased by 2% last week while capacity loosened on this lane. At $2.23/mile for this 750-mile haul, flatbed linehaul rates are almost $0.70/mile lower y/y and have been steadily declining since June, down $1.50/mile since then.

Flatbed load posts were relatively flat last week, although the overall long-term trend is down. Flatbed volumes have decreased by 21% in the last month and are 67% lower than the previous year. Compared to mid-November in 2018, flatbed spot market volume is 54% higher, indicating the manufacturing economy’s strength this year. However, economists expect this resilience to last only briefly as pent-up demand fades and inventories rise. Carrier equipment posts remained at record-high levels following last week’s 5% decrease and are even 7% higher than the prior record peak in the flatbed capacity set in October 2019. As a result, last week’s load-to-truck (LTR) ratio increased by 7% from 8.30 to 8.84.

Flatbed linehaul rates decreased by a penny-per-mile last week to national average linehaul rates of $2.03/mile. Compared to the previous year, last week’s average spot rate is 21% or $0.53/mile lower and now identical to the 2017 spot rate in the third week of November.

Dry Van Report: The shift in imports to the East Coast could be permanent
November 23, 2022

Reefer Report: Supplies of California winter vegetables could be tight for Thanksgiving
November 22, 2022
Factoring has never been easier
November 22, 2022
Market Update: Cargo theft balloons into a nearly $100B problem for carriers, shippers, and brokers
November 21, 2022