Reefer Report: The start of Florida’s berry harvest is delayed to Thanksgiving 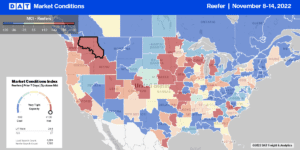 Following Hurricane Ian’s devastating impact on Florida, strawberry growers are still assessing the fallout as strawberry planting restarts. According to Robert Wilhelm of Bova Fresh, based in Boca Raton, Florida, “Our southern farms took the brunt of the storm, but luckily we had not laid any plastic yet down south. However, our Plant City farms lost some plastic and some drip, but overall we got lucky.” Plant City, FL, is the Winter Strawberry Capital of the World, where over 11,000 acres of berries are harvested annually. Plant City is also home to the world-famous Florida Strawberry Festival, held in the first two weeks of March next year, considered to be peak shipping season for berries.

Historically the Florida strawberry season runs from December until the end of March-early April. Still, according to Wilhelm, “the focus is on getting plants into the ground to avoid delaying harvesting. However, we will be delayed by a couple of weeks down south, with harvesting to begin around Thanksgiving. Currently, Mexico has started crossing some strawberries, but it’s been raining in Mexico, so we have been careful not to bring too much fruit.” According to the USDA, weekly truckloads of produce in Florida are currently down by around 63% y/y.

Nicole hit Florida as a rare November Category 1 hurricane last week after making landfall along Florida’s east coast of Florida. Load posts for outbound loads in the storm’s path increased by 16% w/w in Miami with sufficient available capacity to meet the increased demand – spot rates decreased by a penny-per-mile to $1.09/mile last week. Further north, in the largest spot market in the state, linehaul rates in Lakeland increased by $0.01/mile to $1.15/mile after dropping for the prior three weeks. In Jacksonville, spot rates increased by $0.09/mile to $2.27/mile.

In the Pacific Northwest and Northern Plains regions, reefer rates increased by $0.13/mile to an average of $2.03/mile following last week’s major winter storm. Load posts in the region surged, rising by 55% w/w with most of the volume gains in the Pendleton market, where load posts increased by 35% w/w. Outbound reefer rates in Pendleton jumped by $0.15/mile to $2.09/mile and continue to climb along seasonal trendlines on the 720-mile haul to Stockton, CA. Linehaul rates on this lane at $2.43/mile are $0.36/mile higher than the October average and, according to DATs Ratecast, are forecast to peak in January next year at around $2.65/mile. That could be $1.40/mile lower than this year’s high of $4.05/mile.

Reefer capacity tightened slightly in California last week, reversing a two-month slide following an increase of a penny per mile to an outbound average of $2.20/mile. In Fresno’s largest reefer spot market, the rate increased by the same margin to $1.80/mile, while nearby Los Angeles carriers found rates higher at $2.02/mile, down $0.07/mile in the last month.

Even though reefer linehaul rates increased by $0.02/mile last week to $2.08/mile, this year’s pre-Thanksgiving increase is both later than previous years and much lower than what we typically observe in the first weeks of November. Compared to the typical November gain, which averaged $0.12/mile over the prior six years, so far this Thanksgiving, spot rates have dropped $0.02/mile in the first two weeks of the month. Reefer rates were $0.93/mile lower last week than last year and $0.07/mile lower than in 2017.

Flatbed Report: A turning point for housing construction is finally on the horizon
January 24, 2023