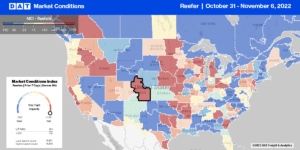 Around this time of the year, the production of leafy greens moves from major growing regions, including Salinas, CA, to Yuma, AZ, in California’s Imperial Valley. This southernmost part of California and Arizona transforms into the “Winter Salad Bowl,” where an estimated 90% of lettuce demand is met between November and March each year. Due to water restrictions, the well-documented multi-year drought in California and the Colorado River water crisis has placed produce growers with a decision to farm or fallow land. The Colorado River provides water to seven states and Mexico, serving agriculture and 40 million people.

Despite this gloomy outlook, Church Brothers Farms in Salinas, CA, plan to relocate their lettuce production facility shortly. They farm and produce salads year-round sup April through November, in Salinas and the San Juan Valley of California for the spring and summer seasons. Then November through April, they move to Yuma, Arizona.  They uproot their farm team and entire salad plant twice a year to enable salad production to continue at the source. With the work of over 200 people and 60 trucks, they break down, move 500 miles and rebuild their salad plant within 72 hours. According to leading freight brokers A&Z Trucking, salad bowl production levels this season is expected to be around 70% of normal due to water shortages and fewer planned acres.

According to Cody Koehler and Tim Bruno from A&Z Trucking, “growers we spoke to at a produce show last week are all planning fewer acres than last year. And because Arizona is going to take the brunt of water restrictions, we’re hearing from multiple sources that produce volumes in Yuma, AZ, that they will be around 70% of what they’d normally be. And then on top of that, we’re hearing now that they’re delaying the season start to the week of Thanksgiving because of colder temperatures”.

Reefer linehaul rates in the San Francisco market, encompassing the Salinas Valley, have been dropping consistently for the past month. However, they did level off at $1.90/mile for outbound loads last week after declining by $0.07/mile in October. Linehaul rates in nearby Fresno, the largest produce market in California, have followed a similar trend dropping by $0.16/mile m/m to an average outbound rate of $1.79/mile. Ontario, CA, including Yuma, AZ, has been on the same downhill trend during October, dropping by $0.17/mile m/m to $2.11/mile last week. Linehaul rates in Ontario also flattened slightly last week, though.

Reefer load posts jumped last week, increasing by 13% w/w but remaining 58% lower than the previous year. Seasonal trends in reefer spot market volumes are emerging in the run-up to Thanksgiving, which should reverse the declining trend over the last month. Reefer capacity tightened the previous week after loosening over the prior two weeks leaving equipment posts relatively flat for October. Last week’s reefer load-to-truck (LTR) increased by 18% to 4.95.

According to the USDA, reefer trucks remain in adequate supply for loads of fruit and vegetables in the 18 growing regions. National volumes are currently around 13% lower than the previous year. In hurricane-ravaged Florida, weekly truckload volumes were 63% lower last week than the previous year signaling a slower start to the state’s produce shipping season. After dropping by $0.14/mile in October, reefer spot rates started off November flat compared to the prior week and remained at a national average of $2.06/mile. Reefer rates were $0.95/mile lower last week than last year.

Flatbed Report: Tractor imports see a slowdown on the horizon
November 8, 2022
Market Update: Poultry is in motion this Thanksgiving
November 7, 2022