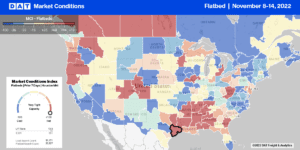 U.S homebuilders get more than a quarter of their lumber from Canada, making the recent slump in lumber prices worth noting. Hardest-hit is lumber sawmills in British Columbia, one of the continent’s most prominent timber-producing regions. Lumber futures fell 4% to $433 per 1,000 board feet last week, 62% lower than the record-high of $1,310 per 1,000 board feet recorded in March this year. In August, Canada’s largest lumber producer West Fraser Timber Company (NYSE: WFG), announced the permanent removal of 255 million board feet of combined production at three sawmills by eliminating one shift at each facility.

According to RBC Capital Markets analyst Paul Quinn, “We are below the bottom, so B.C. producers are losing money,” Quinn said in an email. “I suspect we will get several sawmill closures over the next year.” Winter is typically when sawmills ramp up production to build inventories for sales in the following Spring. Still, as demand in North America’s housing market declines, flatbed carriers must taper their 2023 expectations as the pandemic-fueled homebuilding boom drops from the all-time highs set in 2021.

Last week Western Forest Products temporarily shut down their APD Sawmill in Port Alberni, British Columbia, for the next six months, putting more than 100 forestry employees out of work. Workers were told early last week that the mill would be closing, or curtailed, until the spring due to a lack of wood fiber, a byproduct of the sawmill process. Wood fibers are mainly used to produce medium-density fibreboards (MDF) used in housing construction as building and insulation material to regulate the temperature and climate and to provide noise protection.

The prior week’s tight capacity in New England last extended into New York flatbed markets following a regional increase of $0.22/mile to $2.40/mile. Flatbed load posts jumped by 32% w/w in Albany and Syracuse markets, creating a surge in spot rates in Albany, where linehaul rates increased by $1.43/mile to almost $5.00/mile last week. Flatbed rates in this market have nearly doubled in the past month, driven by solid gains on the short-haul 230-mile lane from Albany to Philadelphia. At $926/load excluding fuel, last week’s rates are $170/load higher than last month’s average and $50/load higher than the previous year.

In the Southwest, flatbed capacity tightened in the Laredo and McAllen border markets following last week’s $0.05/mile increase to $2.23/mile, making it four straight weeks of gains. The volume of loads moving between Laredo and Dallas increased by just over 6% last week while capacity was flat at $2.06/mile, reversing a three-month slide and $0.36/mile lower than the previous year. In the largest spot market in Houston, load posts dropped 6% last week, resulting in an impact on flatbed linehaul rates, which fell $0.08/mile to $2.32/mile. In the high-volume lane between Houston and Ft. Worth, loads moved decreased by 11% last week, dropping spot rates to their lowest in 12 months at $2.80/mile.

Even though volumes were flat last week, Houston to El Paso recorded the highest volume of flatbed loads in Texas. Capacity also eased with spot rates dropping to a 12-month low of $2.72/mile, which have dropped by $1.00/mile since June.

Flatbed load posts dropped 16% last week and are now 66% below mid-November levels last year. Volumes typically decline this time of the year along seasonal trend lines, even directionally tracking close to 2020 and 2021 levels, albeit at around half the volume of those years. Carrier equipment posts are at record high levels following last week’s 10% increase and are even 13% higher than the prior record peak in the flatbed capacity set in October 2019. As a result, last week’s load-to-truck (LTR) ratio decreased to 2.13.

Flatbed linehaul rates were relatively flat for the first half of this year, but since June 1, spot rates have dropped $0.60/mile following last week’s more than $0.02/mile decrease. The national average spot rate, excluding fuel, ended last week just under $2.05/mile, 21% or $0.54/mile lower than the previous year. Compared to 2017, linehaul rates are now half a penny per mile lower.

Flatbed Report: A turning point for housing construction is finally on the horizon
January 24, 2023