Dry Van Report: No signs of a freight recession (yet) 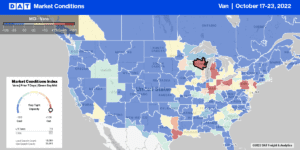 Overhyped talk of a freight recession in recent months seems to have missed the mark, for the time being, anyway. Nearly all freight marketing indicators have demand higher than the previous year and substantially higher than in 2018. According to the leading freight demand for-hire trucking ton-mile index (TTMI) published by Yemisi Bolumole, Ph.D., and Jason Miller at Michigan State University (MSU), demand showed a sharp rebound in August on both a not-seasonally adjusted and seasonally adjusted basis. The August TTMI rebounded to June 2022 levels, although the data suggest ton-miles are flatlining at about 3% above this time in 2021. According to Professor Miller, “in 2019, ton-miles declined by ~1% from 2018 levels, which is consistent with a true freight recession. We are not in one of those (yet).” As things stand, August 2022’s reading is the highest ton-mile reading in the history of U.S. trucking (not exactly consistent with us being in a recession).

August’s sequential recovery in the TTMI was driven by a strong rebound in inflation-adjusted sales in the wholesaling sector, which saw a sharp decline in July. This increase in “real” wholesaling sales was broad-based, a good sign according to Miller, who also added, “in 2019, ton-miles declined by ~1% from 2018 levels, which is consistent with a true freight recession. We are not in one of those (yet)”. The MSU report noted that since trucking activity represents derived demand from manufacturing, mining, wholesaling, retailing, and warehousing, “the TTMI data for August makes clear that the U.S. economy is almost assuredly not in a recession. You don’t have year-over-year ton-mile increases of 3% during a recession,” according to Prof. Miller.

Dry van capacity tightened slightly in Joliet and Chicago last week, the largest freight markets in the Midwest. For outbound loads, spot rates increased a penny per mile to a combined average of $2.27/mile. On the high-volume lane from Chicago to Atlanta, capacity has been tightening since July, with spot rates up $0.30/mile over that timeframe averaging $2.31/mile last week. This time last year, though, linehaul rates were $1.16/mile higher at $3.47/mile, peaking at a 12-month high of $3.87/mile reported in January this year.

Even though load posts dropped by 26% w/w in Brooklyn, NY, dry van capacity was very tight following last week’s $0.15/mile increase to an outbound average of $2.18/mile. In nearby Elmira, NY, outbound capacity was tight as average outbound rates increased by $0.08/mile to $2.09/mile. Short-haul loads from Elmira to Buffalo increased to $604/load, up by $65/load above the September average but around $80/load lower than the previous year. In Pittsburgh, PA, spot rates increased by $0.02/mile to $2.03/mile, and on the 1,000-mile haul to hurricane-damaged Lakeland, FL, spot rates continue to climb, averaging $2.51/mile over the last seven days. Even though linehaul rates on this lane have increased by $0.56/mile since May, last week’s average is $0.87/mile lower. 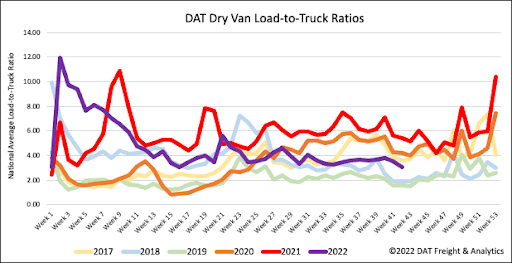 Load posts plunged last week, decreasing by 16% w/w and 23% m/m. Compared to mid-October of the previous year, volumes are 41% lower, while carriers posting their equipment in search of loads are 22% higher y/y. Spot market capacity continues to loosen as equipment posts increase by 13% m/m, and compared to 2019 when the market was oversupplied with trucks, volumes last week were 8% higher. Last week, fewer load posts and more equipment posts decreased the dry van load-to-truck ratio (LTR) by 18% w/w from 3.03 to 2.47, not far off 2018 and 2019 LTR levels. 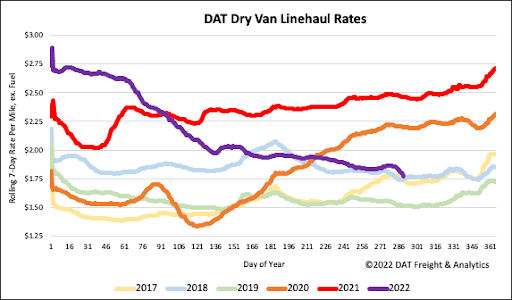 The post Dry Van Report: No signs of a freight recession (yet) appeared first on DAT Freight & Analytics – Blog.